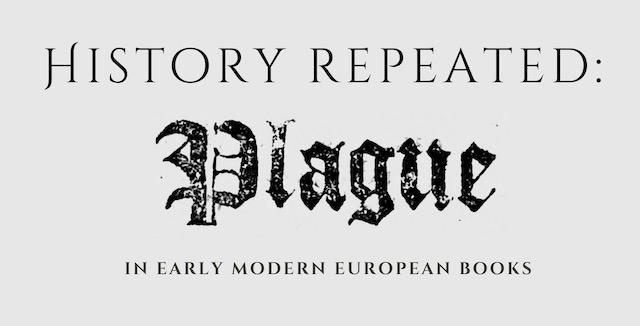 The COVID-19 pandemic is often referred to as “unprecedented,” and for most of us alive today, it is. But how “unprecedented” are these times in the scope of history?

Historically, epidemics have not been uncommon, and have affected societies for millennia. The Tisch Library Department of Special Collections is home to a number of books that respond to plague and pestilence through statistical, ethnographic, and literary documentation, addressing themes of quarantine and contagion that certainly ring in modern ears.

Giovanni Boccaccio provides valuable insight into the lives of Black Death-era Florentines in his 1353 “Decameron” —a collection of one hundred short stories told by ten fictional young Florentines who escape the bubonic plague-ridden city to an abandoned villa in the countryside. Similarly, the COVID-19 pandemic has prompted some modern city dwellers to flee urban centers during surges of infection, just as Boccaccio’s characters did so many centuries ago. 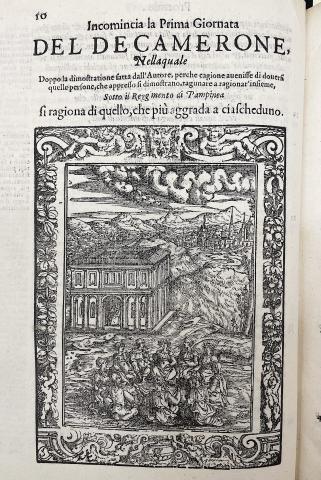 Pictured here is an engraving from Tisch Library’s 1590 edition of Boccaccio’s "Decameron,” which depicts the ten refugees gathered outside their villa overlooking the city of Florence.

During London’s 1665 bubonic plague epidemic, efforts that mirror modern social distancing measures and quarantines were enforced to curb the spread of infection. According to Orders of Health recorded in this 1721 miscellany of 17th century plague sources, some public spaces were closed and the sick were told to isolate in their homes for thirty to forty days, "till their Soundness might appear.” 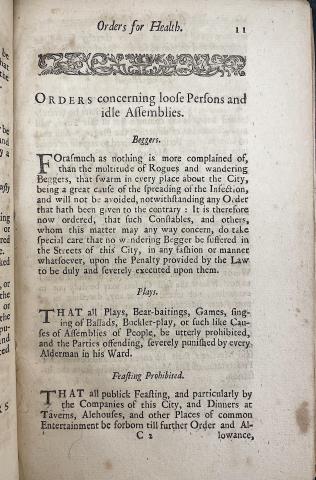 Displayed here are Orders of Health that specifically prohibit gathering for feasts and assembling for events such as plays.

Look forward to the upcoming exhibit by Megan Szostak A'22 in the Fall of 2022.